February 4 ,2018. It’s Super Bowl Sunday again, the time when the masses are lulled into watching grown men play a boys game. We pay these men more per/hour than everyone else so what does that say about our society? In 1989 I attended the Super Bowl at Joe Robbie Stadium in Miami to watch Joe Montana and Boomer Esiason in a great game that landed Jerry Rice the MVP. The better part of the story is how I ended up sitting in the private box of the owner of the Philadelphia Eagles in the 1st place. 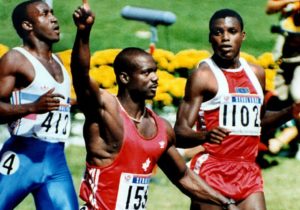 In 1988 Ben Johnson had won the Gold Medal in the 100M race against Carl Lewis and every Canadian was thrilled until the I.O.C. stripped him of his medal and record, a few days later. At that time I was working as a “Head-hunter” for a succesful Agency in Toronto and I said to my partner “we have to help Ben” and he agreed. We went up to his house in Markham and recruited him under the eye of the world media.

In our first meeting with Ben at the “Four Seasons” restaurant in Yorkville, I asked him what he wanted to do next and he said Football. We recruited a few guys from the Argos(Danny Barrett, Dwight Edwards, Chris Schulz) to help train Ben as he had never played before. Humber College let us use their indoor facility and we started to train Ben. At the same time I had been busy talking with various NFL teams to garner the interest in Ben.

There was great interest in Ben Johnson among the people I talked with but I was leaning toward Tex Schramm and the Cowboys. I talked with Tex many times on the phone and he started to brush me off to his Director of Player Personnel Gil Brandt but the last thing I said to Tex was “I’ll see you at the Superbowl.”

My partner and I traveled to Miami a week before the game to assess the situation. We were running into a wall on the corporate side of things as the president of GM Canada said “we do not want to be associated with Ben until he sorts out his predicament.” We flew Ben in a couple days before the game and the fun started. I post an article from the Toronto Star saying “Miami not so Super, for Big Ben” and it has a picture of me (in the Fedora) with Ben and Miss Jamaica Janelle.January25,1989F02

Then came game day so we headed down to the stadium and to the “corporate Tent City” entrance where a police-man let us go in to get tickets after Ben gave him an autograph. With those tickets we walked up the red carpet to the “Private Box” entrance area where the attendant said “I cant let you in here with these tickets” then Ben gave her an autograph and we were in.

Now we were wandering through the  common area when Billy Joel was being announced to sing the national anthem. Ben, Janelle and Dwayne went out to the stairwell to watch and I walked up where the Box entrances were to locate the Cowboys box. Then I gathered them all and we went to the wrong door where  a policeman said “this is Leonard Toews box, of the Eagles” I told him to say that Ben Johnson was here and he closed the door. When it opened there was Doctor J (Julius Irving) whom immediately hugged Ben and we were all in.

It was a very nice setting and group so Ben gave them all autographs and we settled in to watch a nail-biter. At half-time we went back to the “rich guys” common area and spotted O.J. Simpson so we ran after him and he called Ben “Mr. Run” he gave me his number and agreed to help Ben. On our way back to the box we ran into Chuck Knox of the Seattle Seahawks. He shook Ben’s hand and said “that was the greatest race I ever saw”. Then I knocked on Tex Schramm’s door and Tex came out looking shocked. I told him “I told you I would see you at the game” he had Tom Landry and Gil behind him and gave us the same corporate brush-off that GM did. We proceeded back to the Eagles box and finished watching the game.

What I learned from this experience was the way the ultra-rich play is much different than you and I. Their game is “people-control” and they use the teams the same way the Roman emperors used the Gladiators, Bread and Circus strategy.  When future historians are studying our culture they will be puzzled how we let social- history repeat in so many ways.

Our national game is Tewaraton (lacrosse) and it is “creator’s game” it is used for much different purposes than mind control.

May Peace become you as you enjoy the Game 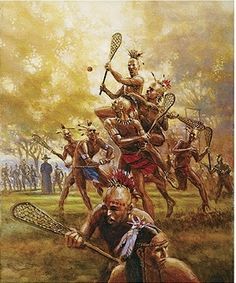