Dec. 17, 2017. In the Mohawk creation story we started out in the sky-world, a world that passes this world on a long cycle. On one of the passing’s a beautiful woman with child, was placed here on the earth when it was covered in water. So we were placed here after the flood and were never apart of the antediluvian (pre-Noah’s flood) history of the earth . The question arises why were we placed here? The ones on the skyworld will be coming back again as they promised and it looks like it will be soon. 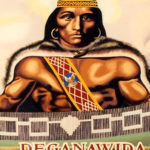 At the time of the last passing was when Dekanawida came to this earth and he had a specific mission to carry out. He was the one who gave us Kayanerakowa (Great Peace) and formed the first true democracy and Confederacy based on constitutional law which became known as the “Iroquois Confederacy” . The first nation to join was the Mohawk then the Oneida, Onondaga, Cayuga and the last nation was the Seneca. On the plains overlooking Niagara was where the Confederacy Chiefs and Dekanawida were waiting for the Seneca’s response but they were not sure. Dekanawida said “if tomorrow there is 2 suns in the sky, will you then join?” The Seneca agreed to join if 2 suns did appear and the next day there were 2 suns in the sky. They were the 5th nation to join the original constitution based democracy.

That sun was only in the sky for a couple days and Dekanawida had the people gathered as he was telling us about the 2nd sun. This talk became known as the “Serpents Prophecy” and this is how I remember it;

The Red serpent and White serpent then started a war between each other and were destroying mother earth. The birds will fall from the sky, the fish will turn on their bellies in the water, all the Elm trees will die and the air will burn the eyes of man. Then the red and white serpents would be at a standstill for awhile when a Black serpent would arise from the south and he would come and lead the other serpents. They would invade and destroy one country after another always planning who would be next. Then as the black serpent was looking to see who was next he only saw the Onkwehonwe healing and he said “I have no fight with them” and then a bright light, many times brighter than the sun will come from the east. The Black serpent will be fearful and swim south, never again to be seen by the Onkwehonwe.

The Red Serpent will see the light and he will crawl north leaving a snaily trail behind him, never again to be seen by the Onkwehonwe. Part of the tail of the White serpent will break off and crawl to the hilly country to heal with the Onkwehonwe and the rest will make a feeble attempt to swim toward the light.

The light shall be the return of the skyworld and I will return then. This will be the time the peace shall reign over the entire earth and a great time to be alive.Then he got into his stone canoe and he flew to the skyworld.

It seems like he was talking to our generation and we should all take heed. We all know about this phenomena in different ways but it is the same thing. We are supposed to live in harmony and to survive with each other and all nature as bothers and sisters living on our mother earth. We should all try to reconnect to our mother as she will be going through some changes and so will we.

Keep a good mind and stay on the path. Hut Day enay

As I sit at your fire and gaze in it’s passion I see in it’s coals, the truth of its ashes. I surrender my heart wide open to you, to do what you want cause I know it’s true.