Time travel is an ancient concept/idea found in most cultures around the world especially in film and books but it is real and not fiction. The human mind is a beautiful thing because at it’s seat is a piece of source energy, which is our connection to all creation. When humans first arrived here on earth the first covenant made was with nature, we agreed to survive and co-exist with all life as brothers and sisters on our mother the Earth. This is also the origin of the 2Row Wampum belt and why it is such a sacred agreement.

This is the Good Message that leads to the power. If we are all a part of the one, then when we put our minds together for the goodness of all, peace will always prevail. When we keep a good mind we are always on the path to peace so I remind all to keep a good mind and stay on the path.

All of us have the power but few utilize it so I give a personal perspective on my experience with the time-walker phenomenon. When I was twelve years old I had my first real experience. It was the first time in my life I had a headache so my mother gave me an aspirin and told me to lay down. The pain was very intrusive and so I gathered my thoughts around it and kept telling it to get out of my head. When there is only one thought in your mind and no other, is when this works best. When I achieved the one thought mode my perception rose through the ceiling and about 100 feet above my house. I then moved to the next street and saw my younger brother talking with 3 kids from the next street so I came down to hear them. Their names were David, Donnie and Danny. David told my brother that Danny was the new kid and that he wanted to fight me. Donnie told my brother to go get me and the fight would be on. 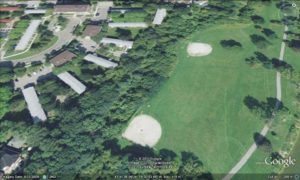 My perception then moved back up and I watched my brother as he was running back to our house but he tripped and scraped his knee while letting out a swear word, he got up and ran to our house and came in yelling” Dougie, Dougie Danny Lane wants to fight you”.

At that moment I got up from the chair and walked into the hall and in 3 seconds the door opened and my brother said “Dougie, Dougie” and I finished “Danny Lane wants to fight me?” He was astounded and asked how I knew. I re-iterated the entire conversation between the 3 of them and then told him he better put a band-aid on his knee and I reminded him he is not suppose to swear.

This was my first experience with the time walker gift. I spent many hours in every library over the next few years to try and find out any information on this higher intelligence but to no avail. I made a pledge to myself that I would devote the end part of my life to figure this power out.

Many of us can relate to this phenomena which sometimes starts with all your perception seemingly in slow motion. I had many more of these episodes in my life but I would like to tell about my last one a few years back.

I was visiting my sister in Toronto and opened up the Sun newspaper and read that Sarah McLachlan was splitting up with her husband and just then my sister’s friend came running in all excited saying she just won a trip to a private party with Sarah on Friday next. I told her I would love to meet her and she said I could be her date.

The next Friday we drove to Sheppard and Yonge St. and in a private raquet club was the event where Sarah was holding a live radio interview. So I was sitting in the front row feeling kinda weird cause I had never done anything like that when I heard a voice come in my right ear and say ” look at you sitting here like a groupie” then another voice in my right ear said “you are no groupie” . Then Sarah walked into the room and everyone stood up as I was looking at her everything went into slow motion even the sound was a cacophony and I knew this was a time-walker incident. As she moved into the room there was bright light shining just behind her and I tapped my friend and asked her what was the light? But she did not see it. I kept looking into the light and then I saw my spirit guide talking with her spirit guide and as I tried to listen to them those two voices both said “turn away its none of your business” so I turned away and in a moment I saw the light fade through my peripheral when I looked Sarah was walking to the stage.

She did her live radio interview and I just was flabbergasted at what just happened. When she was done she said everyone could get a picture with her. I was the last one and when I looked at her I said you are so beautiful I need a pic and her face turned beet red and she gasped I was looking in her eyes and saw that she recognized me and I gasped. Here is the pic 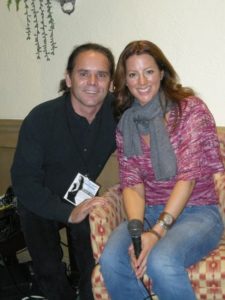 I tried talking to Sarah a few times after that but she seemed scared of me but I did leave her my card and told her I would definitely audition for her if she needed a guitar player. I did write a song about the incident and I mailed it to her I called the song “Shine” I told her she owns the song it is my gift. The next record she put out she called it “Shine On” but she did not use the song.

These are just 2 of my time-walker experiences among many in my life. If you read this story and have similar experience , please leave a comment. The real revolution is spirit evolution