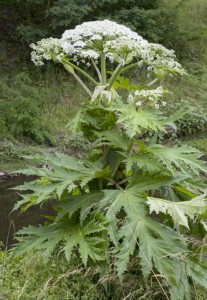 THIS IS SERIOUS AND NOT A JOKE!!!

Heracleum mantegazzianum commonly known as Giant Hogweed, cartwheel-flower, giant cow parsnip,”hogsbane” or giant cow parsley, is a plant in the family Apiaceae is an invasive species that is worse than Poison Ivy or Poison oak, Giant hogweed is native to the Caucasus Region and Central Asia. So the story goes it was introduced to Britain as an ornamental plant in the 19th century, and it has also spread to many other parts of Europe, the United States and Canada. Gardeners loved the beautiful flowers and planted them all over Britain and in the Royal Gardens, until it was too late… and the plant escaped into the wild to spread up and down the riverbanks.

Giant hogweed has a stout, bright green stem that is frequently spotted with dark red and hollow red-spotted leaf stalks that produce sturdy bristles. The stems grow to more than 2 m. high.[8] The hollow stems vary from 3–8 cm (1.2–3.1 in) in diameter, occasionally up to 10 cm (3.9 in). Each dark red spot on the stem surrounds a hair, and large, coarse white hairs occur at the base of the leaf stalk. The plant has deeply incised compound leaves which grow up to 1–1.7 m (3 ft 3 in–5 ft 7 in) in width.

Giant hogweed is a biennial or monocarpic perennial,[7]:827 the plants dying after they have set seed. It usually flowers in its second year from late spring to mid summer, with numerous white flowers clustered in an umbrella-shaped head that is up to 80 cm (31 in) in diameter across its flat top. The plant produces 1,500 to 100,000 flattened, 1 cm long, oval dry seeds that have a broadly rounded base and broad marginal ridges. Tall dead stems may mark its locations during winter.

Cow parsnip, Heracleum maximum, a Canadian native very common in Newfoundland, Quebec and northern Ontario, is often misidentified as giant hogweed. Because of its similarity to cow parsnip, numerous false reports of giant hogweed are reported annually to local OMNR offices in Ontario. A plant can be identified as giant hogweed by checking the stems, which are green with obvious purple blotches from which stiff white hairs arise. The similar but harmless native cow parsnip has green (usually) to purplish (rarely) stems that are ridged but unspotted, and covered with fine white hairs; like giant hogweed it can be large, reaching a height in excess of two metres (10–12 ft). Giant hogweed flowering heads (compound umbels) branch frequently, forming clusters of several flowering head 80+ cm [2.5 ft.] across.

I personally have seen this on the banks of the Credit River up in Georgetown where it is spreading downriver by means of the river itself.

Once infected, the victim must stay out of the sunlight for up to 7 years after the date of infection.It starts with excruciating pain and blistering. The flower of the Giant Hogweed creates the it’s phototoxic venom through photosynthesis and is almost harmless at night – which is the best time to destroy it. Make sure you do this with protective eye wear, as contact with the eye invariably leads to complete blindness. 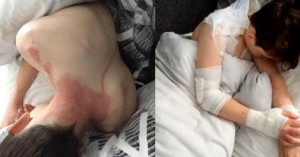 These are pictures of a young 11 year old young boy that was playing on a riverbank… not knowing of the lurking danger in white!

Still think it’s not serious? The band Genesis wrote a song that quite educational that enjoyed in my youth off the their Album “Nursery Cryme” (1971) called Return of the Giant Hogweed.  The plant seems to grow, then die out, only to return years later again. Here’s the song, the lyrics are below.

“The Return Of The Giant Hogweed”

Turn and run!
Nothing can stop them,
Around every river and canal their power is growing.
Stamp them out!
We must destroy them,
They infiltrate each city with their thick dark warning odour.They are invincible,
They seem immune to all our herbicidal battering.

Long ago in the Russian hills,
A Victorian explorer found the regal Hogweed by a marsh,
He captured it and brought it home.
Botanical creature stirs, seeking revenge.
Royal beast did not forget.
He came home to London,
And made a present of the Hogweed to the Royal Gardens at Kew.

Waste no time!
They are approaching.
Hurry now, we must protect ourselves and find some shelter
Strike by night!
They are defenceless.
They all need the sun to photosensitize their venom.

Fashionable country gentlemen had some cultivated wild gardens,
In which they innocently planted the Giant Hogweed throughout the land.
Botanical creature stirs, seeking revenge.
Royal beast did not forget.
Soon they escaped, spreading their seed,
Preparing for an onslaught, threatening the human race.

The Dance Of The Giant Hogweed

Mighty Hogweed is avenged.
Human bodies soon will know our anger.
Kill them with your Hogweed hairs
HERACLEUM MANTEGAZZIANI

I hope this helps!