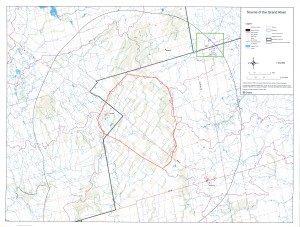 June 24, 2018. My journey started in 2001 when I moved up to a farm within the 6 mile British protection limit as stated by the Captain General Haldimand in his order. Captain General has the power to make law, the same as the King. 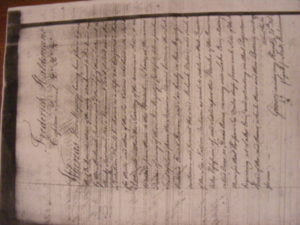 I moved my office to my home at the farm and started to work successfully in a remote peaceful setting. My eldest son lived with me at the farm and my 2 other children were there every weekend so it was wonderful for all of us. I was playing in a band called “White Tiger” and was gigging on weekends as well so all was right on target.

In August 2001 I got in a car accident where I was T-Boned and driven 180 feet into the ditch. They cut me out of the car and I woke up a month later in the hospital. As I tried to remember what had happened to me, this vision came into my mind like an old memory. It was Dekanawida talking to the people while there were two suns in the sky behind him. He was telling us about the skyworld in our creation story and telling us about it’s long orbit over this planet. He then told us what would happen in the future with the appearance of 3 serpents, first a white one then a red one and finally a black serpent.

As this vision came to me I noticed that I was strapped to a hospital bed with tubes coming out of me and another old memory came to me of my clanmother telling me about my music , she said if I ignore the gifts of creation I am destined for bad luck, ill health and poverty.

My first day home from the hospital was September 11 2001 and I was still unable to walk but was watching on TV as the twin towers were coming down. I immediately fell off the couch and was on the floor yelling “George Bush is the Black Serpent” so they just put me in my bed. 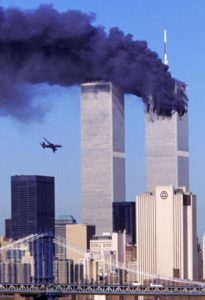 It took a long time for me to learn how to walk again from the brain injury Diffuse Axonal Injury but I was never able to return to my role as a management consultant so was now put on a disability pension. Because I no longer had a car or could drive I had to move back to Toronto where my family could help me better. I stayed in Toronto for 1.5 years and then moved back to the same farm where I located my “claim” as per the Haldimand Proclamation.

I went to see MP Garth Turner at his office in Milton BC in 2005 and showed him my claim which was “lot 1 concession 11 Nottawasaga township” and I presented the survey I had done by the Queen’s printer. I filmed the whole meeting and told him now I had properly presented my claim to her majesty’s representative and his job was to make certain this happened.

I was trying to be an example of peaceful reconciliation before they announced the Truth & Reconciliation Commission . The response of the conservative government was to send former Finance Minister Jim Flaherty in to take one part of my claim and start building a private mansion for himself.

Then I received some intel about the farms before they were purchased by a group of 72 33rd degree Freemasons and they planed on building an underground shelter to survive the coming pole shift. This project became known as the“mega-quarry” that was planned for Kanekota.

The farmers up here banded together and formed NDAC to oppose the destruction of pristine farmland. They held a walk from Toronto to Kanekota and I joined them when they reached Kanekota. I had many meetings with the different farmers up here trying to show the back side of this story.

I was the only Mohawk living here in Kanekota so I contacted the head General at Whitehall in England and reminded him of the standing order from a ranking General that he has to follow. I talked with his Captain and legal adviser for quite awhile about law and I reminded him in military law when a General does not follow an order, the Captain is to assume his position and make sure the order is followed.

I then started an action in Federal Court “Thahoketoteh of Kanekota vs Her Majesty the Queen” about the land within the British protection zone that these serpents were trying to destroy. Although they ruled against my claim it was successful because I had asked for a shareholder list of the 2 numbered companies that merged to form the Highland Group, they withdrew their application because of that. It begs the question who are these people ex PMs, Premiers, etc.?

I started to meet with a group of Church elders known a KAIROS in Shelburne a few years back to discuss the Truth & Reconciliation Process and I only taught the truth and the great law. They represent the settler community that we Onkwehonwe deal with when we are not in our “reservations”. These settlers were taught that we Iroquois are extinct in Ontario when they were in Grade 3. They were also taught about “blood quantum legislation” which is illegal and what the Indian Act is based upon. Most of the members have never been to an Indian reservation so I was a great addition to their group.

My journey for reconciliation started 17 years ago and now my name has come up to move into the Elders Lodge in Tyendinaga so I will be ending my stay in Kanekota and will now go to where I will be buried when I die. My personal experience reveals that the “government” will never give back 1 inch of stolen land willfully. The only way to true reconciliation is the return of our land.

I will send another letter to the Chief of the Defense Staff Sir Nicholas Carter https://en.wikipedia.org/wiki/Nick_Carter_(British_Army_officer) reminding him of his standing order to protect this 6 mile stretch of land along the Grand River for the Mohawk people forever .

All Canada is under Admiralty (law of water) except the waters here which are under British military protection. The precedent has already been set by Great Britain when they invaded Palestine to create Israel in 1947 based on a proclamation.

In 1947 Her Majesty’s army built a mansion at Hornings Mills in Kanekota and because of the most corrupt system that Ontario is, we need a British regiment stationed right in Kanekota to protect us from these predators.

In our ancient teachings we are to go to the hilly country to heal and Kanekota is the highest land in Southern Ontario so it is where many of us will end up. Kanekota will be out of the water when they rise. We are in the time of the Black Serpent now so we will see the return of the skyworld soon and the return of the Peace. 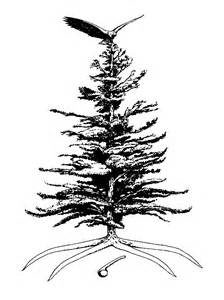