For the elites that is…

For the common folk, the political election systems are ALL broken. The elites, NWO, the Illuminati, the Vatican, the Jesuits, the Jews, The Muslims… all are happy the way things are.

Let’s take a look at the American political scene as an example. We start with the current president. Barak Hussein Obama is not what I call a Christian name, so it should not come as a surprise to anyone that he has an Islamic agenda for the USA. He even goes so far to say that America is no longer a Christian nation. I personally disagree on that. The basic morals of all of America, including Canada, the USA, and Mexico are certainly Judeo-Christian in origin, and the majority would concur that it still is valid.

I believe that even in the last general election, which had Romney to contest Obama’s re-election, he was there to lose. Romney is a Jesuit, and the Jesuit puppet is Obama. Apparently it was more important for Romney to shop for some real estate in the LAST two weeks of the election than to try and win the election. He was the puppet that was supposed to lose, and that cheated the American people out of their real choice. Ron Paul would have destroyed Obama.

Flip forward 4 years and we have Donald Trump running for the Republican nomination. He is not a politician. He is a businessman. Tell me, do you think that politicians are good businesspeople? No, they are not. I would love to see a businessperson at the helm, making “good deals” for the citizens of this once great nation of the USA. 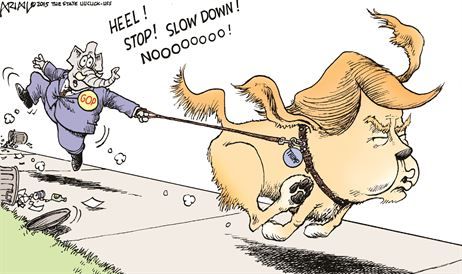 Those elites that have modified the American political process to a  two party system with a nomination process, followed by a general election. This was done to eliminate any chance for the people to be able to select their own grass roots candidate in opposition to their hand picked puppets.

Let me explain. To nominate a candidate for either party, you must sign up as a party member. That means that if you are an independant, you are eliminated automatically from deciding who the candiate is for either party. That leaves about 45% of the nation’s voters out in the cold, and eliminates a whole lot of people from influencing the elite’s goals. Next, you have the SuperPacs which superced and are a large factor, (especially for Hitlery Clinton) for the chosen one’s lead.

Let me say right now that I believe that the intended next President is Hillery Clinton. That is the elite’s choice. The straw in the ointment is “The Donald”. I believ Trump would destroy Hillery in opposition to what that lame ass puppet Mitt Romney has to say that a vote for Donald guarantees Hillery’s Presidency.

The elites are afraid of Donald Trump. It’s not that he’s incorruptible, but they have very little leverage over him. He is self-funded, he has money, and he’s a businessman that has the true interest of the American people because a businessman thrives best in a healthy economy.

So what did the elites do? At a gathering where almost 60 private jets showed up, the Koch Brothers raised over $75 MILLION to fight Trump through media pressure. I call it a slander campaign because what Trump talks about is the feelings of almost every hard working American citizen, as well as those that wish they were working. It’s time that som one steps up to the plate and puts America first.

So what do I hear? Trump is a racist, he hates women, he incites violence, he is a NAZI because he has nationalist views, and he’s anti-Muslim. So let’s address these issues.

Trump is all about closing off the borders… to illegal immigration. STOP RIGHT THERE! There is no such thing as illegal immigrants. They are illegal aliens and should be removed. That is the law. If it is not, then why do we have any laws at all. Immigration is important to building a nation. Bringing in the right people necessary for a “healthier” economy is an essential key to a beneficial immigration policy. There are a lot of illegal aliens coming across the southern border that are criminal elements seeking refuge from their own country’s legal system. FACT! Do we want those unwelcome aliens? Of course, we don’t. There is a problem with such an open border, so a fence makes sense. Should America pay for it? I think Mexico’s problem should require Mexico’s participation. There is nothing racist about this. They make it out that there is.

Along the same lines, Trump wants to limit Muslim immigration into America. I can’t disagree. I do not see many Christian refugees – the one’s that are being murdered, and the people that really need our help. I look at Europe and the mess that they are in. Europeans are sick to death of the sense of entitlement that the Muslims are bringing into their countries. Violent crime has gone up over 30%+++ since the flood started. Many refugees hate the culture that they are invading. They should all be sent back. This is not racist. This is survival. We have to vet these refugees and understand the true reasons why they are coming here. At this point we have no way to properly do this. Aside from that, we have to understand our own citizen’s plights. We have record high unemployment iin excess of 22%. Before anyone wants to argue that, you have to understand that the governments have played games with us and have changed the rules many times since year 2000. You can check this for yourself at www.shadowstats.com.

When you understand that we have over 60 million Americans without work, please explain to me how it makes sense to further the already bankrupted American government with a million more refugees.

In Canada we imported over 25,000 of these refugees at a cost of over $2.5 BILLION to the already suffering Canadian taxpayers. For those that are mathematically challenged, that’s $75 cost to every man, woman and child in Canada! Now I hear they want to bring in more. We can’t do it without destroying our own countries. Now please tell me why Saudi Arabia, Quwait, Qatar, and Egypt don’t take in a single refugee?

That brings us to the point of nationalism. I find nothing wrong with a leader that does what is best for his own people, and here we get to issue of nationalism. The big lie is in linking nationalism to Nazi-ism. NAZI is an acronym National Socialism, but the real lie is to think that all nationalists are Hitler fans. Trump is a Nationalist, but he certainly is not a socialist. I am also not a socialist. I tell everyone that to understand socialism just ask a friend for the money to buy that friend an ice cream cone, and then eat half of it before you give it them. Ask them them how they like that? That’s socialism.

A lot of people say that we live in a democratic free market capitalist society. What baloney! We live under a facist oilgarchial tyranny running a rigged and fixed market. Please explain how a nation can lose almost 80% of their manufacturing base and have the stock market show a growth of over 100% in the same period. The stock market is completely controlled and funded by institutional trading that completely rigs and manipulates the true money markets of Gold and silver!

All our western banks to a one are insolvent and are artificailly being kept in a bubble. The bond market and the stock market will collapse soon. The only exit strategy for the banksters is WAR! … and war will come.

Lets examine the issue at his rallies and that he promotes violence there. If you have people that are trolls that have nothing better than to attend rallies to show demonstrate their dissent, they should be removed. Those people should attend Trump’s opposition’s rallies and show their support for them instead. The media is the main culprit in this big con. Believe me when I tell you that there are just as many incidents at Democrtic rallies in respect to Hillery’s criminality regarding Benghazi and the illegal mail server in her washroom. In her washroom! Who puts a mailserver in their washroom? Why in a washroom? The issue is that we have a controlled maedia that is now funded to destroy and liable Trump because that’s all they can do.

There is another funny little thing. Trump needs to get over 1200+ delegates to ensure the nomination. The reason why Rubio and Kasich don’t quit is because every delegate that they can keep from Trump is more of a chance that the elites will prevent Trump from becoming the nominated Republican candidate for the Presidency of the United States This will bring about  a brokered nomination process where they hold all the cards. They will cheat Trump to win – and that they will do in contradiction to the true will of the American Republican party members. After all they don’t care about anything else other than winning.

What we see in the USA is nothing different than what we saw here in Canada, where the will of the media for Trudeau to be the next Prime Ministerial puppet of the Rothschild’s and the Vatican trumped the people’s choice in the NDP, which was a revolt against cronie politics. The media pushed the battle between the Liberals and Conservatives without ever even mention the NDP for the last 2-3 months leading up to the election, even though in surveys the NDP held over 40% of popular opinion. Every nation in the west is the same. The system is broken for the people, designed to prevent the ability to implement change, but it is certainly not broken for the elites.

“Eve Of Destruction”
by Barry McGuire

The eastern world it is exploding
Violence flarin’, bullets loadin’
You’re old enough to kill but not for votin’
You don’t believe in war but whats that gun you’re totin’?
And even the Jordan River has bodies floatin’

Don’t you understand what I’m tryin’ to say
Can’t you feel the fears I’m feelin’ today?
If the button is pushed, there’s no runnin’ away
There’ll be no one to save with the world in a grave
Take a look around you boy, it’s bound to scare you boy

Think of all the hate there is in Red China
Then take a look around to Selma, Alabama
You may leave here for four days in space
But when you return it’s the same old place
The pounding of the drums, the pride and disgrace
You can bury your dead but don’t leave a trace
Hate your next door neighbor but don’t forget to say grace